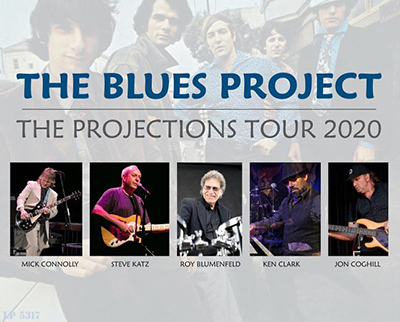 Back in the good ol' days, adjectives such as "unique", "genuine", "influential", "innovative", "exciting", "dynamic", "incandescent," and "trail-blazing", were often used by peers and music critics to describe the sounds of the Blues Project, arguably the greatest relatively unsung American rock band of the swinging 60s.

In the fall of 1965, The Blues Project played alongside the likes of Big Joe Williams, Son House, Bukka White, Skip James, John Lee Hooker, Muddy Waters and Otis Spann, to name a few. It was these legendary sold-out performances at the famed Cafe Au Go Go in Greenwich Village that eventually led to the release of their phenomenal debut album, Live at the Cafe Au Go Go. The Blues Project made a musical revolution, turning many people on to the American blues heritage.

The blues, however was only their starting point…

In 1966, after their leader Danny Kalb declared that "we're not reviving the blues, we're looking to interpret what's happening today," the Blues Project moved beyond the blues and recorded their studio masterpiece, Projections, an album that defies description, ranging from folk-rock to soul, from rock 'n' roll and blues to jazz, all blended together to produce a tremendously wide spectrum of music. With that album they advertised that there was no type of music they could not play, always managing to give each their own special sound - a bit of rock 'n' roll, a touch of rhythm 'n' blues, some soul, a dash of jazz, and you still have only a portion of their style.

Straight out of New York, the Blues Project soon toured all over North America. Back then, California, was the place to be, with San Francisco and Los Angeles as the two epicenters of the new age of rock and roll. The five New Yorkers played there and conquered the West.

In Los Angeles, MGM gave them the red carpet treatment They were put up at the Beverly Hilton Hotel, given a tour of the Hollywood film studios, and were even rewarded with a private showing of the new David Lean film, Doctor Zhivago.

In San Francisco, the birthplace of the hippie counterculture movement and of the psychedelic rock, they achieved the admiration of their local peers. The not-yet famous Grace Slick, for example, dreamed to be the band's new female singer after sharing the bill with them at the Avalon Ballroom when she was still a member of the Great Society. Ed Denson, manager of Country Joe and the Fish, was another who became an instant fan after seeing them at the Matrix. "Their stage presence and their performance have an authority which comes from the secure knowledge that they are one of the best groups going," he recalls. "For the three weeks that they were here they were indisputably the best band in the city."

He was so right. Danny Kalb on lead guitar, Steve Katz on rhythm guitar and harmonica, Roy Blumenfeld on drums, Andy Kulberg on bass and flute, and Al Kooper on organ, all skillful musicians who mastered their instruments. They were so talented and versatile that they set a high standard for other performers of their generation.

In 1967, at the peak of their success and after the release of their third album, Live at Town Hall, the band appeared at one of their last gigs - the legendary Monterey International Pop Festival which featured Otis Redding, The Byrds, Jimi Hendrix and many more soon to be legends. The Blues Project then split up in two different directions, with Kooper and Katz forming Blood, Sweat & Tears, and Kulberg and Blumenfeld keeping the Blues Project name and carrying on for another year and for another album, Planned Obsolescence, before changing the name of the group to Seatrain.

At the dawn of the 70s, for the joy of their old fans, Danny Kalb and Roy Blumenfeld put together a new version of the Blues Project with which they released two new albums, Lazarus in 1971, and Blues Project in 1972. The good reception eventually led to what their fans really wanted and waited for for a long time, i.e. the reunion tour of the classic lineup which culminated with their widely acclaimed appearance at the 6th Annual Schaefer Music Festival in Central Park in June of 1973, and with the release of a live album, Reunion In Central Park.

After a few sporadic reunion concerts through the 80s and 90s, the "original" Blues Project disbanded for good, most of all because Al Kooper became too busy with his solo career, and the passing away of Andy Kulberg in 2008. Despite it all, even in the new millennium, the band maintained a die hard fan base of old and new fans, so it was mostly for them that at least Danny Kalb, Steve Katz, and Roy Blumenfeld, did a new reunion tour in 2012. The shows were well received and their fans asked for more so, in 2020, here we go again. The Blues Project is alive and well, with Katz and Blumenfeld leading a new powerful lineup that also includes three young and talented "pupils": Mick Connolly on lead guitar, Jon Coghhill on bass, and Ken Clark on keyboards and vocals.

The Blues Project was one of the first, and remains one of the finest, of the creative bands, Go and see them when they hit your hometown. Trust me, they're like a fine wine. They get better with age, and the best is yet to come!