THE MUSIC OF ABBA-Direct From Sweden 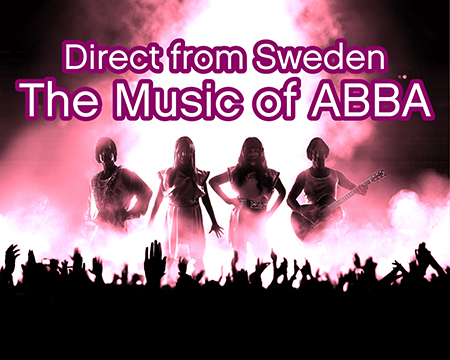 With over a million tickets sold, the musicians in “The music of ABBA” are no strangers to the incomparable sound and look of Sweden’s greatest music export!

The band consist of several handpicked members from some of the greatest ABBA tribute acts. Other productions out there are watered down with constant cast changes.  Ours is not.  We will have the best and most consistent product that features many of the familiar faces that have played your stages over the years.

With meticulous attention to costumes, make-up, musical arrangements, movements and the singing, nothing is left to chance. Adding a few of Abba’s live traits such as great solos, musical numbers and a complete live band with back-up singers, ensures an extra dimension unheard of in most similar productions.

For an experience beyond average, the band also collaborates with various symphony orchestras and comes with full orchestra charts.

Dance, sing along and enjoy the hits such as Dancing Queen, Chiquitita, Waterloo, Mamma Mia, The Winner Takes it All, Fernando, SOS, Take a Chance, Money Money Money, Knowing Me Knowing You, Super Trouper, Gimme Gimme Gimme, Voulez-Vous and many more and maybe discover some new favorites! Of course, the show is played 100% LIVE!!!!

With over 400 million records sold ABBA is Sweden’s biggest export ever!  When the Musical “Mamma Mia” hit the American Stages in 2000 it became an instant classic and the ABBA tribute was born.

ABBA is the greatest pop group of all time, only compared to Elvis and The Beatles.  ABBA started in 1971 and ended as a group in 1982.  Their music continues to be passed on from generation to generation and are loved by the whole world.

Direct from Sweden The Music of ABBA will deliver the closest ABBA experience you’ll ever get with some of Sweden’s most experienced and talented singers and musicians playing 100% live.  The audience will be on their feet the entire show!!