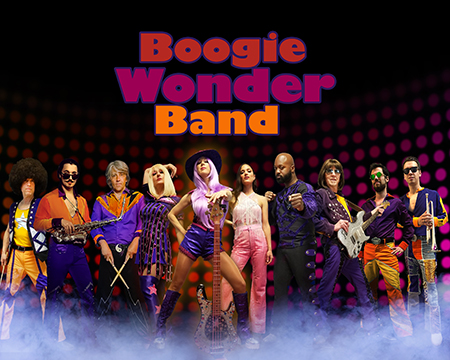 After more than 3000 shows around the world the Boogie Wonder Band has become the most celebrated DISCO band of our generation. They have played in Canada, Bahamas, Bermuda, Cuba, China, Macao, Italy, Ecuador, Hawaii, Monaco, France, Japan, India and in over a hundred cities in the US, from casinos, to theatres, festivals and clubs like in the famous Cutting Room in New York City, Los Angeles iconic Whisky a Gogo and Brooklyn Bowl in Las Vegas.

With recent stops in Miami Beach at the LIV Nightclub for VIP event with Shaquille O’Neil, Disco Symphonic show with the Columbus Symphony, Carnivale du Vin in New Orleans for Emeril Lagasse Foundation, Festival Montagne & Musique in France, Ontario 54 in California and of course as the sole Canadian band on the unforgettable Ultimate Disco Cruise, they continue to spread the word and raise the bar!

From major sporting events like Monaco GRAND PRIX, Allstate Sugar Bowl in New Orleans to premieres to entertaining celebrities such as the SNL after party with Chris Pine and LCD Soundsystem, Celine Dion and Emeril Lagasse, everyone knows BWB will bring the house down!

Over the years, BWB has had the privilege to share the stage with Kool & The Gang, Village People, The Jacksons, Rick James, War, CHIC, KC & the Sunshine Band, Gloria Gaynor, Maxine Nightingale, The Trammps, Paul Shaffer, Pointer Sister, Styx, Foreigner and the who’s who of funk and disco...

If we didn’t know better, we’d say that the Boogie Wonder Band, arrived via a time machine because this 10-piece band busts out funk-a-licious grooves and disco-strutting jams like they are straight out of the ‘70s. Channeling the era with a full throttle high-octane live show, each member dons eye-popping Las Vegas-inspired costumes and flashy personas. They don’t just hail from another land; they come from another decade - where Disco ruled the dance floors!

“Thanks so much to the band for doing my song justice and great. You all keep Play that Funky Music where it is year after year, and only continuing to get bigger and timeless as the days roll on.” Rob Parissi - Wild Cherry

“Worked with this group, they are everything and more when you see them live!!!!” Deney Terrio - Dance coach/ choreographer for John Travolta in the movie Saturday Night Fever.