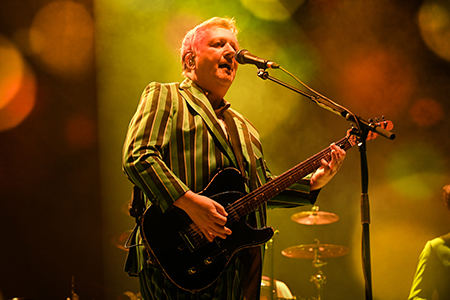 Don’t be fooled by the title of Glenn Tilbrook’s latest album, Happy Ending, or at least not all of it. He’s happy, of course, and why wouldn’t he be? He’s more than earned his place at pop’s top table as one of our most cherished singers, guitarists and songwriters, not to mention an in-demand and endlessly endearing live performer. But more than 40 years after he first answered an ad placed by Chris Difford looking for like-minded sorts to form the band that became the much-loved evergreen Squeeze, an ending is nowhere in sight.

In 2014 alone, in addition to releasing the highly acclaimed Happy Ending (“an unqualified triumph” – Daily Mirror), Glenn is busy treading the boards both at home and away, saddling up with Mr Difford again for a tour of songs and stories under the banner “The At Odds Couple”, and – also in tandem with Chris – writing material for a TV series based on the life of another South London renaissance man, journalist and broadcaster Danny Baker.

“It’ll be just Chris and myself on stage playing songs in quite a different way,” says Glenn. “We’re very different musicians to when we first started out, we’re way ahead of where we were – you could say we’ve actually learned how to play properly! We’ve put in a lot of time rehearsing, and have gone into our catalogue of songs from before we started making records, things people won’t have heard before, and there’s some good stuff in there."

Away from the constant and steady stream of fine music, Ivor Novello, Nordoff Robbins, Mojo and PPL awards, landmark plaques commemorating his formative Squeeze years in Greenwich, Glenn is also active in the charity Love Hope Strength, set up by his friend Mike Peters of The Alarm.  LHS raises money to set up cancer units in countries in need, and works tirelessly on raising awareness on bone marrow donation. His work with the charity has included record-breaking treks up mounts Everest, Fuji and Kilimanjaro, which should come as no surprise to anyone already in thrall to the man.

Be it mountains or music, Glenn Tilbrook is never very far from the top.