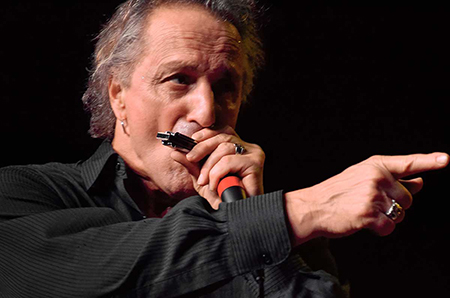 When blues legend James Montgomery plays the harmonica, he "brings it on home". Whether it's recording with Kid Rock, sitting in with Gregg Allman, or fronting his hot band of thirty years, Montgomery plays with authority. While growing up in Detroit he learned first-hand from the masters - James Cotton, John Lee Hooker, and Jr. Wells - at the legendary "Chessmate."

Over the years, he's carried on in the tradition and continues to be a vital presence in Blues as one of the most dynamic performers on the scene. Montgomery has toured with many major artists, including Aerosmith, Bonnie Raitt, Bruce Springsteen, the Allman Brothers, Steve Miller and others. He has jammed on stage with B.B.King, Buddy Guy, John Lee Hooker, Jr. Wells, James Cotton, Charlie Daniels, Bonnie Raitt, Greg Allman, Laverne Baker, Patti LaBelle, and Peter Wolf among others, including an impromptu session with Mick Jagger at New York's "Trax".

Christine Ohlman is a singer, songwriter, guitarist, recording artist, music scholar. Her nickname "The Beehive Queen" refers to her distinctive platinum beehive. Christine's recording career began at age 16 with the New Haven, Connecticut-based band The Wrongh (sic) Black Bag recording a version of the Blues Project's "Wake Me, Shake Me" for the Mainstream Records owner/producer Bob Shad. Relocating to Connecticut and working out of a studio in Wallingford, Connecticut (initially called Syncron Sound and now known as Trod Nossel), Ohlman next fronted a group called Fancy with her brother Vic Steffens, releasing an LP "Fancy Meeting You Here" and a 45 "All My Best" on the Poison Ring label. She overdubbed backup vocals for the Rolling Stones Metamorphosis album and developed a lifelong friendship with Rolling Stones producer Andrew Loog Oldham.

Christine Ohlman became the lead vocalist for the Saturday Night Live Band in 1991. She appeared with Reverend Al Green on the show's 25th anniversary special.

Also joining the James Montgomery Band is Barrence Whitfield, a Soul and R&B vocalist who has worked with Tina Turner, George Thorogood, and Robert Cray, and Deric Dyer, an R&B Saxaphonist extraordinaire who played in Joe Cocker and Tina Turner’s bands.