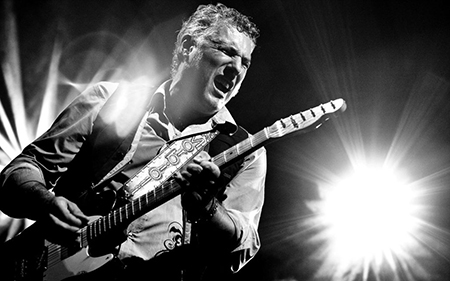 He can breathe fire from his axe like a young Clapton or Stevie Ray. Crowded, noisy bars hush a bit when he steps up and folks look around to see who this is making such a holy wail.
His personality and unique playing style shine through all his interpretations so much that, even while recalling the styles of blues greats such as Freddy King, Albert King, B.B. King, Albert Collins, T-Bone Walker, you see and hear that every note is coming straight from the heart. And it’s so infectious that you’re caught up in it before you realize what’s happening.

His guitar playing is nothing short of magic, and as a singer, his powerful voice recalls Sam Cook, Otis Redding, Robert Cray and Donny Hathaway. You don’t even think about it, you just know that the blues flow so naturally for Rob, and his guitar playing and vocals are so polished, he sounds as if he grew up closer to Chicago than Verona, Italy.

Rob was born in Verona, Italy and picked up the guitar when he was very young. He has played at some of the biggest European festivals like the Amsterdam Blues Festival, New Orleans Music Festival in Ascona and San Remo Blues Festival.

In 1991 he founded his own band MORBLUS which brought him critical recognition and awards. Since then, he has collaborated with many important artists such as Guitar Shorty, Jesse Yawn, Robben Ford, Roomful of Blues and Big Daddy Wilson. Besides his electric trio or quartet formation, Rob also performs in an acoustic setting with his own songs published on his CD „Acoustic Me“. In 2017, he is releasing his new album „From Scratch“ with his electric trio ROB MO.

In the USA, he has performed at B.B. King’s Blues club in Memphis, and Antone’s in Austin, Texas, the North Atlantic Blues Festival in Rockland, Maine and regularly tours in New England. Since 2011 he has been granted consecutive US working visas as an artist of extraordinary ability. 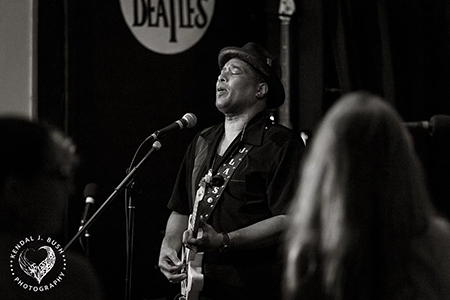 Willie J Laws is a Texas guitar “gun slinger”, vocalist and song writer following in the footsteps of T-Bone Walker, Lightning Hopkins, Albert King and many others. This music is the kind of real Texas soul, all mixed up with classic R&B, country, blues/funk that grows from the Texas soil. Willie has performed nationally and internationally, including 2 tours of Russia at the invite of the US Consulate in St Petersburg. Once the house band at The House of Blues/Mandalay Bay in Las Vegas and Margeritaville in New Orleans.  Winners of the Mass Blues Society Challenge 2011, Semi-finalists at the International Blues Competition 2012 and Beale St Kings Awards. A two time nominee for New England Music Award - Best Blues Act 2015 and 2016, 2015 Nominee for Boston Music Award - Best Blues Act 2015. Come see what many are calling the "Real Deal".

The Willie J Laws Band is one of the notable Blues acts of the region with a modern funky style that’s uniquely its own. The band’s sound includes deep Texas roots music, add some funk, and jazz influenced bass patterns, and the influence of various Afro-Caribbean drum beats, a genre-bending sound tempered with a groove from Motown, Memphis, Muscle Shoals, the Gulf Cost of Texas, and New Orleans. This isn't strictly Blues, much of it is original music with it's own sound and tempo. You will enter the Willie J Laws Band musical train, cover a varied terrain with its assorted musical sounds. It's an exciting, fast moving train, and you will most definitely enjoy the ride! Come hear the “The Last Prophet of the Funky Texas Blues”