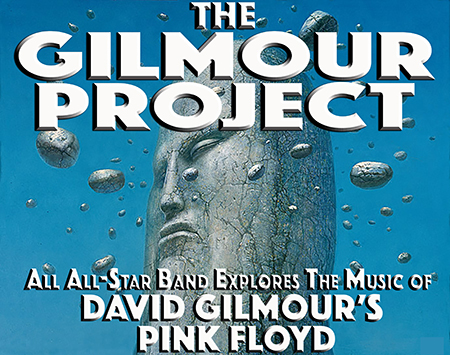 The Gilmour Project was poised and ready to launch in April 2020, then the world hit the pause button. They re-emerge in 2021 pivoting to David Gilmour’s Pink Floyd repertoire. The songs that compel exploration & improvisation are mainly Gilmour’s and this rendition certainly does not dismiss the iconic contributions of all 5 historic musicians that comprise the Pink Floyd complement. The Gilmour Project incorporates musicians whose background is both prog(ressive) AND improvisational, and is the only band since Blue Floyd in 2000, endeavoring to take these songs ‘OUT,’ speaking in jazz protocol, without disregarding the cherished classic hooks, licks & musical phrases.

Acclaimed musicians Jeff Pevar (lead guitar with CSN, David Crosby, Phil Lesh, Ray Charles) and Kasim Sulton (bass & vocals with Todd Rundgren’s Utopia, Meatloaf & Blue Oyster Cult), Prairie Prince (co founder of The Tubes, & drums with Todd Rundgren, Jefferson Starship, Phil Lesh), Mark Karan (guitar & vocals with Bob Weir, RatDog, The Other Ones), and Scott Guberman (keyboard & vocals with Phil Lesh), are more than psyched to bring you the initial installment of The Gilmour Project via what is sure to be an epic live stream on June 24 at 7pm PT from The Great American Music Hall in San Francisco, CA.

Blue Floyd was formed in January 2000, at the dawn of the 21st Century, taking full advantage of the then ‘new’ thing they called social media. A conglomeration of top notch players from other bands came together to spread this music marked by the use of philosophical lyrics, sonic experimentation, and elaborate live shows. International tape collectors codifying the band’s utter brilliance, created an enduring mystique apart from & in contrast to the tribute band phenomenon. Blue Floyd was not … & its descendent The Gilmour Project is not that either. It goes beyond improvisational, while remaining faithful to Floyd's musical touchstones. That combination has resulted in an incessant demand for the band’s triumphant return.

The improvisational ‘jam gestalt’ of the legendary Blue Floyd, which both Pevar & Prince performed with, matched with Pink Floyd deep tracks, hits and fan favorites, including solo Gilmour gems, and accompanied by ‘Floydian’ audio FX from Paul Simon producer ‘The Duke of New York’ (Graceland – The Remixes) gives you none other than The Gilmour Project.

Be sure to drop in on June 24th at 7pm PT for the live stream from The Great American Music Hall and get excited for The Gilmour Project’s US tour coming to a city near you in January 2022. The first 500 live stream purchasers will receive the ‘ECHOES OF BIRTH’ Rehearsal Mixtape download! Culled from the actual June 21-23 rehearsals chronicling the ‘birth’ of The Gilmour Project, this mind blowing content will never be sold or made available any other way. And all livestream purchasers will automatically receive first-tier access to VIP tickets for all January tour dates being announced June 20th, on sale June 24-25th. You do not want to miss this!