What results is the most sonically diverse and distinctive disc in Cook’s vast and varied catalogue, which has earned 11 Juno nominations and one win for 2000’s Free Fall. On these 11 instrumentals, programmed beats and dusty electronic textures are interwoven with syncopated handclaps, deep dubby basslines and popping percussion. Sitars and violin share the space with synthesizers and sound effects. Notes and rhythms dance playfully back and forth between speakers. Naturally, Cook’s masterful guitar work commands centre stage with its elegant balance of subtlety, in-the-moment honesty and blazing technical prowess. But here, it also pivots between worlds — past and future, familiar and fresh, acoustic and electronic — redefined by technology like every element of modern life.
“We’re all involved with our computers in a big way, though we malign them,” laughs Cook. “People complain social media is ruining communication and that people just text instead of call. But love and romance and imagination and art also happen through computers. People fall in love online. People talk to loved ones on Skype. People write great love letters on the computer, create great works of art, great compositions. It has become this integral part of human expression and I wanted to give it a voice in what I was doing.”
And in doing so, the artist who hadn’t planned to travel for this album found himself in the most exotic locale imaginable.
“I wanted to make what I was doing feel like Constantinople, the ancient city that existed between the East and the West. It was the meeting point of all these great cultures — Africa, Europe, Asia, India. I want my music to be that place: The Constantinople of sound. A place where ancient sounds meet with modern ones and pass though that port. 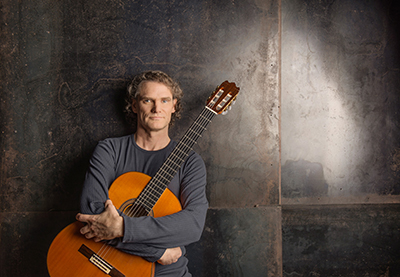 For Jesse Cook, music has been a journey. Sonically and literally.

“Over the years, I’ve taken my music and tried to cross-pollinate it with music from different parts of the world,” explains the 50-year-old global-guitar virtuoso. “For the (2003) album Nomad, I went to Cairo and recorded with musicians there. On my (2009) record The Rumba Foundation, I went to Colombia, and worked with musicians from Cuba as well. On (1998’s) Vertigo, I went down to Lafayette, La., and recorded with Buckwheat Zydeco. For me, the question has always been: Where did you go? Where did you take your guitar?”
The short answer this time? Nowhere. And everywhere. After two decades of criss-crossing the world in restless pursuit of inspiration, innovation and collaboration, the Paris-born, Toronto-raised Cook changed course for his ninth studio album One World, out April 28th on eOne Music world-wide. Instead of exotic locales, he stayed home in his studio. Instead of a foreign legion of performers, he relied on his own devices. And instead of exploring cul de sacs of music — flamenco, classical, rumba, world beat, pop, blues or jazz — he united them.
“On this record, it’s not really about going someplace,” he says of the album, whose cover depicts a vast, ancient tree. “The idea is that there really is just one world. If you pull your focus back far enough, you start to see all music as being branches of the same tree. They’re all connected to the same trunk from way back.
“For example, my strange way of playing guitar is a hybrid of styles. I was a classical guitarist as a kid, and I studied flamenco and then I studied jazz. So there are three musical and guitar traditions in my background. And one of the forms I use, rumba flamenco, is itself a hybrid created in the 1800s when sailors were coming back to Spain from Cuba, having heard these Cuban rhythms. And here I am, 150 years later, taking it and mixing it back with modern music and seeing where it takes me. Music is a constantly evolving thing.”
As is Cook’s creative approach. Despite its humble home-made origins, One World begins another chapter in the multi-tasking artist, composer and producer’s quest. His destination: The digital realm. To create the disc’s emotive melodies, fluid grooves and rich sonic tapestries, he incorporated technology more than ever before. Give credit to his precocious young assistant.
“I have two small children, and my son is forever trying to get on my computer. If I’m in my studio, he’ll come in and sit down and just start pushing buttons and making things happen in the recording program I use. At first I was terrified he would mess things up. But he actually got really good at poking around. I started going, ‘Wow, what’s that? What are you doing? Let me in there!’ I started writing tunes using weird loops and metallic and electronic sounds. And I found myself interested in taking what I do and putting it in a more modern context. I’ve leaned heavily on ancient instruments. But for this record, I put those instruments side by side with modern sounds — unabashedly so.”