Martha Davis and The Motels

But 2014 is proving to be the most exciting year yet for Ms. Davis and the band, with the above mentioned returned to Australia/NZ, a major summer tour in the US, new recordings for the first major studio album in decades, and a much anticipated Blu-ray/DVD release of their January 19, 2014 performance, “Martha Davis and the Motels Live at The Whisky A GoGo’s 50th Anniversary.”  Fans will get to see Martha and the band introduced by Bafta winner and Golden Globe Nominee Rosanna Arquette, and Grammy nominated singer/songwriter Linda Perry. 2014 started with their January 9th show at the prestigious Crystal Ballroom in Portland.

Some 2013 highlights were: January 25th, performing at NAMM in their “Living Legends” special concert series, Main Stage with some of the most significant musicians of the 21st century backing her performance. The Motels also gained a significant social media presence  for the first time as well, enhancing their tickets sales, with consistently packed venues, and sold out shows.  Tour dates included the East Coast swing at the prestigious Bergen Performing Arts Center in New Jersey, and a 4th of July headline for the final night of the San Diego/Del Mar County Fair. One of the band's biggest shows was their September 2, Labor Day concert, with The Bangles, for roughly 10,000 people, at the Los Angeles County Fair, the largest fair in the United States.

Martha continues her passion for writing, currently co-writing several songs for the new album with not only her current band, but also an exciting and diverse group of collaborators. One of those new songs is a co-write with multiple Grammy winner Charlie Colin, the co-founding member of TRAIN (and co-writer of mega hits, DROPS OF JUPITER and CALLING ALL ANGELS) and with San Francisco based Tom Luce.

The most impressive and current band line-up includes bass player Brady Wills, Nicholas Johns on keyboards and former Gnarls Barkley touring band members Eric Gardner and Clint Walsh, on drums and lead guitar, respectively. They have been together 10 years, longer than the original Motels.  As icing on the cake, original Motels sax player Marty Jourard has begun touring with the band again, and is also playing on the new album. That album is highly anticipated, and details will be announced later in 2014, for what appears to be a banner year for Martha and the band.

The latest news: Martha Davis and the Motels will join the Go-Go’s for a US Summer tour, beginning July 5th, 2014, in Florida.  Venues include the 15,000+ seat DTE Energy Theatre in Michigan, formerly Pine Knot, one of the first such amphitheatres in the US.  Full tour schedule can be found at www.themotels.com, or at the Martha Davis and The Motels Official Facebook page. Davis and the band also mark their return to Manhattan for the first time in many years on August 25, at one of the city’s top venues, The Iridium. 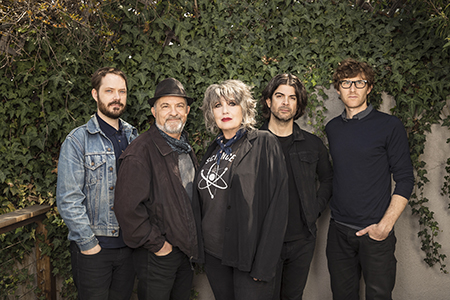 ‘Her voice is unique, unmistakable and timeless’ - Robert Hilburn of The Los Angeles Times’ called her “arguably the most charismatic female performer in rock.”

"A CHARISMATIC Martha Davis and the Motels gave their audience a five-star experience at the Thornbury Theatre on Saturday night. Davis was in fine voice, singing songs from the bands 1980s heyday as well as some soulful new material...age has failed to blunt her rock ‘n’ roll attitude, her dexterous guitar playing and ability to reach into the emotions of her diverse audience."   Julia Erwin of the Herald Sun, Melbourne, Australia, March 2014

That review of Martha Davis and the band’s return to Australia, in March of 2014, more than 20 years after the band last played there, has shown Hilburn's words to be as true today, as when Martha Davis and The Motels first conquered the Sunset Strip and the new wave scene.

Whether you were there when The Motels first burst onto the music scene, or just discovering them now, 2013 became a year of rediscovery for this iconic artist. Martha began writing songs at the age of 15 and has always known the songs she writes are her mark. Born and raised in Berkeley, California, she moved to Los Angeles in the early ‘70s, along with the first incarnation of The Motels. The band reformed in 1978 and was immediately signed to Capitol Records in 1979.

The Motels recorded six records for Capitol. Their self titled debut was greeted with positive critical reviews in 1979 and exploded in Australia on the strength of the #2 Pop single, “Total Control” (which was later covered by Tina Turner for the We Are The World album). 1981, their sophomore effort, “Careful” went Top 50. Then, in 1982, the Motels released “All Four One”; the smash single “Only The Lonely” rocketed into the Top 10, immediately propelled the album to gold status, which broke The Motels wide open in the United States. The group dominated the music scene and was voted Best Performance for “Only The Lonely” at the 1982 American Music Awards. In 1983, the “Little Robbers” album went gold do to the Top 10 single "Suddenly Last
Summer", as well as their Top 40 hit "Remember The Nights." In 1985, the “Shock” album yielded the Top 20 hit, “Shame” and 1987 saw the release of Martha’s first solo effort, “Policy”.

In 1988, Martha took a sabbatical from the music scene, prompting the question, “Where have you been?” Davis responded, “Looking for my sense of humor. I seemed to have lost it somewhere around 1984. It’s not a business that one should be in without a sense of humor."

Though constantly writing during her sabbatical from performing, Martha worked on various collaborations with artists including Ivan Neville, Arthur Barrow (Frank Zappa), Jeff Daniel, Kiki Dee, Richard Feldman, to write songs for a new musical for the Civic Light Opera, and author a new musical of her own entitled Rebecca. Capitol also reissued an expanded and re-mastered edition of the “All Four One” album during this time, which contained previously unreleased bonus tracks; and in the Fall of 2000, “The Motels Anthology” was released, a first ever double disk of rarities, B-sides, soundtrack cuts, as well as live performances. Martha Davis also worked with several independent publishing deals, including one with DreamWorks SKG. She wrote a children’s album and an upcoming jazz album as well.

Beginning in 2012, Martha began touring with the current and strongest incarnation of The Motels. Dates included a landmark performance at the legendary Hollywood Bowl in September, the band’s first eve performance there.

PLEASE NOTE OUR COVID POLICY: Beginning August 20, Tupelo Music Hall will require either proof of vaccination or a negative Covid 19 Test (administered 72 hours or less) prior to entry at all shows. A security person will be checking credentials before admitting anyone into the building.